Pigmentary Degeneration of the Retina

My first grade teacher spoke with my parents. They were noticing that I was having trouble in class and wondered if I had trouble seeing. I didn't know any different, so didn't realize there was an issue. My face was nearly back to normal following the monkey attack earlier that year (though the monkey did just barely miss my eyes...that in itself was a miracle). So my parents took me to the ophthalmologist, who diagnosed me with pigmentary degeneration of the retina. (I was proud of myself for remembering what it was called at that age, as it is a mouthful.) More commonly known as retinitis pigmentosa, it is similar to its cousin macular degeneration, in which the vision slowly diminishes as the retina degenerates. The two conditions go in opposite directions. Where macular degeneration starts with the central vision and works outward, retinitis pigmentosa starts with the peripheral vision and works inward. Both conditions lead to blindness, and neither has a cure. My peripheral vision was starting to go, and the doctor predicted I would be blind by the time I was a teenager. I would never be able to drive. It's likely I was born with the condition. The news was devastating to my parents. They got multiple opinions, just to be sure, but everyone agreed. In October 1984, in first grade at the age of 6, I got my first glasses. The following day, we got our family picture: 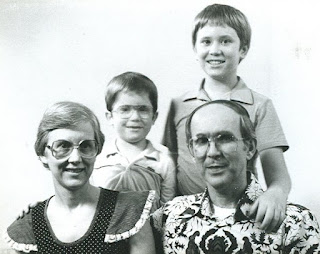 I remember my first day going to school wearing glasses. I was embarrassed at first, and it would be years before I actually liked wearing them. With the humidity in the Philippines, where we lived at the time, we quickly discovered that my metal frames rusted due to sweat, so I would have plastic frames for the next few years. (I haven't heard of that happening in recent years, so I'm not sure if there have been developments in that area, or if it was just the pair I had.) As a fairly active kid, I also went through glasses. One memorable time was when we went to Expo '86 in Vancouver, BC, and they fell off and shattered. (Fortunately, I had another pair at the hotel, but I had to go the rest of the day without them until we got back to the hotel. After that we were much more careful to make sure the material they used for the lenses was shatter-proof. I also used straps and cords at times to hold them on my face.)

After second grade, we returned to the US in the summer of 1986. We did this every few years for a year at a time to visit our supporting churches and update them on our ministry, as well as to have time with family. There was a lot of travel involved. While in the US, we went to the foremost expert on retinitis pigmentosa west of the Mississippi. He examined my eyes and found no sign of it!

Retinitis pigmentosa has no cure. It leads to blindness. My vision was going starting from the peripheral vision, and had it progressed normally, I would eventually have had tunnel vision, and then it would be gone. I was forecast to be completely blind by the time I was a teenager, and I would definitely never be able to drive. My RP was completely healed! I love telling ophthalmologists that it healed, as that's something it doesn't do. The retinas don't just grow back, but mine did! I got my driver's license when I was 24 - delayed not because of my eyes, but due to slow reflexes as a child. I still wear glasses, but it is due to astigmatism (the corneas are slightly misshapen, which distorts the vision a bit), a condition I much prefer to blindness. They are mild, and one doctor a few years ago told me I could legally drive without them, though it's better to be wearing them. A more recent eye exam revealed 20/20 vision in one eye (I forget what the other eye was, but it wasn't quite as good). Following is my Optomap of both eyes side by side from a few years ago. (Optomap is a picture of the back of the eye, which presents an alternative to having to dilate the eyes, and you get to see a cool picture afterwards. I find it fascinating.) It shows no sign of RP. The doctor showed me Optomaps of patients with RP, and they showed holes in the retinas. None here. 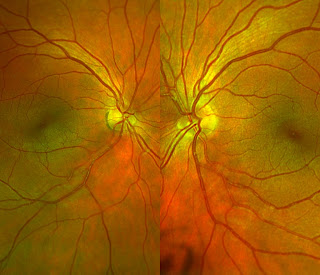 This was the most dramatic miracle I have experienced, and it has made me super thankful that I can see. By all accounts I should be blind, but I can see! God's healing is mindblowing. It has reinforced the amazing power of prayer. It has also given me a passion for things related to vision. I am thankful for my glasses, and I have done research in recent years to figure out ways of raising awareness of the benefits of them. They don't heal anything, but they can be a big help with seeing things, reading, driving and more. With blue light blockers gaining popularity in the past few years, they can also help to keep (or minimize) harmful kinds of light from causing damage to the eyes. I definitely recommend getting regular checkups, as vision trouble can be subtle, and people often don't realize they need glasses and are surprised how much better they can see once they get them. I feel if everyone who needs glasses actually got and wore them, the world would be a safer place. They sometimes have a bit of a stigma, and I feel they're actually something to be proud of. I want to do what I can to remove the stigma.
Posted by StevenSauke at 11:17 AM