"Fred Phelps, why do you persecute Me?" 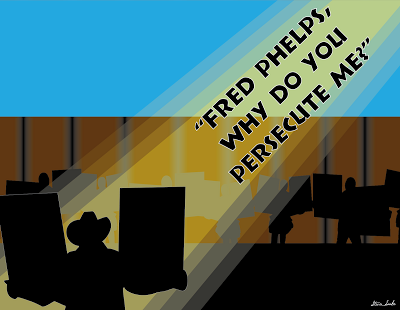 As many people know, Fred Phelps is the pastor of Westboro Baptist Church, which is famous for protesting funerals of soldiers and other events, purportedly warning people of God's wrath and hatred because of homosexuality and various other issues that they oppose.

God, on the other hand, has a decidedly different opinion on the matter. As the apostle Peter put it in 2 Peter 3:9, "The Lord is not slow in keeping his promise [to return and judge the world], as some understand slowness. Instead he is patient with you, not wanting anyone to perish, but everyone to come to repentance."

Westboro's vitriolic and hateful actions have recently reminded me of another apostle, originally named Saul. Later in life, he told Timothy, "Here is a trustworthy saying that deserves full acceptance: Christ Jesus came into the world to save sinners—of whom I am the worst. But for that very reason I was shown mercy so that in me, the worst of sinners, Christ Jesus might display his immense patience as an example for those who would believe in him and receive eternal life" (1 Timothy 1:15-16).

What great sin did Saul commit to call himself the worst of sinners? He started out as a Pharisee, a member of a religious sect that was devoted to keeping the Law of Moses to such an extent that they added a bunch of laws to it, and actively sought to root out anyone that broke said laws. When Jesus came to fulfill the Law, they were instrumental in putting Him to death because they felt He spoke blasphemy. After Jesus' death, resurrection, and subsequent ascension into heaven, Saul went berserk trying to get rid of Jesus' followers. He oversaw the stoning of Stephen, which made him instrumental in the first recorded Christian martyrdom. However, as he was on the road to Damascus to spread his bigotry and murderous rampage...

Meanwhile, Saul was still breathing out murderous threats against the Lord’s disciples. He went to the high priest and asked him for letters to the synagogues in Damascus, so that if he found any there who belonged to the Way, whether men or women, he might take them as prisoners to Jerusalem. As he neared Damascus on his journey, suddenly a light from heaven flashed around him. He fell to the ground and heard a voice say to him, “Saul, Saul, why do you persecute me?”

“I am Jesus, whom you are persecuting,” he replied. “Now get up and go into the city, and you will be told what you must do.”

The men traveling with Saul stood there speechless; they heard the sound but did not see anyone. Saul got up from the ground, but when he opened his eyes he could see nothing. So they led him by the hand into Damascus. For three days he was blind, and did not eat or drink anything.

In Damascus there was a disciple named Ananias. The Lord called to him in a vision, “Ananias!”

The Lord told him, “Go to the house of Judas on Straight Street and ask for a man from Tarsus named Saul, for he is praying. In a vision he has seen a man named Ananias come and place his hands on him to restore his sight.”

“Lord,” Ananias answered, “I have heard many reports about this man and all the harm he has done to your holy people in Jerusalem. And he has come here with authority from the chief priests to arrest all who call on your name.”

But the Lord said to Ananias, “Go! This man is my chosen instrument to proclaim my name to the Gentiles and their kings and to the people of Israel. I will show him how much he must suffer for my name.”

Then Ananias went to the house and entered it. Placing his hands on Saul, he said, “Brother Saul, the Lord—Jesus, who appeared to you on the road as you were coming here—has sent me so that you may see again and be filled with the Holy Spirit.” Immediately, something like scales fell from Saul’s eyes, and he could see again. He got up and was baptized, and after taking some food, he regained his strength.


Saul went on to become Paul, and God used him powerfully to spread the gospel throughout the greater Mediterranean region, possibly even reaching as far as Spain. Paul's life was turned around while he was on the warpath of bigotry.

It occurs to me that if there was hope for Paul, who was not only yelling hateful slogans, but actively trying to bring the subjects of his wrath to "justice" (see: execution), there is hope for Fred Phelps and his band of people in need of a savior. Both Saul and Phelps honestly thought that they were serving God by spreading their hatred, and both were wrong. Saul did a 180 and turned his life around, repenting of his sin and dedicating the rest of his life to making a positive difference in the world. Will Westboro? I hope and pray they do before it's too late and they find themselves standing before God's throne of judgment, only to find that what they thought was a service to God was in fact counterproductive and sinful. If they don't repent, I fear they will hear God tell them, "Depart from me, you who are cursed, into the eternal fire prepared for the devil and his angels. For I was hungry and you gave me nothing to eat, I was thirsty and you gave me nothing to drink, I was a stranger and you did not invite me in, I needed clothes and you did not clothe me, I was sick and in prison and you did not look after me" (Matthew 25:41-43).
Posted by StevenSauke at 11:13 PM No comments:

Idioms that Make No Sense

English is a weird language. We say some of the strangest things that make sense to some and are complete lunacy to others.

What it means: "I'm impressed with you!" (I could be impressed with what you're wearing, how you did your hair, your makeup, something cool that you did or made, etc.)

What I think when I hear it: "Can I use a mirror? I can't exactly see myself, unless you're OK with me just looking at myself from the shoulders down."

What it means: "I understand and can identify with what you are saying."

What it means: "I understand and can identify with what you are saying."

What I think: "Well, that's a relief! I was worried you had hearing problems."

What it means: "I completely agree with what you just said, and I wish more people understood that."

What it means: "Laughing Out Loud", or more accurately, "I find this amusing to some degree, and I may or may not be making any noise at all."

For example: "I literally died."

What they mean: "I was very impressed/appalled/starstruck/had some other strong emotion"

What I think: "Literally? If you literally died, and you're talking to me now, you must have resurrected. It's a miracle!"
Posted by StevenSauke at 12:31 AM No comments: