Ranger's Apprentice: The Ruins of Gorlan 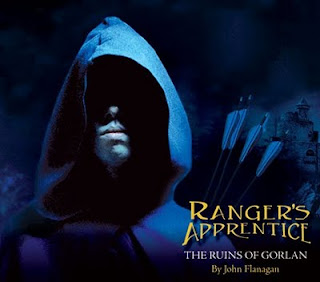 A couple weeks ago, I was on Facebook and saw an ad that said that if I "Liked" the page for the Ranger's Apprentice series, I could download the first ten chapters of book one, The Ruins of Gorlan. Since I enjoy books of that sort, I decided to go for it. The free download, as was their intention, hooked me, and over $40 later, I am now a proud owner of the first six books. :-)
Book one begins with the preparations of Morgarath, the evil Lord of the Mountains of Rain and Night and former baron of the fief of Gorlan in the kingdom of Araluen. Fifteen years earlier, he was driven out of his fief in a sound defeat, and he has been lying in wait, preparing his army of Wargals, a sort of humanoid creature with features of dogs and bears, to attack and make another attempt at conquering the Kingdom. Also on his side are the Kalkara, huge hulking animals like bears with ape-like features.
Meanwhile, in the fief of Redmont, a group of orphans lives in the ward of the castle of Baron Arald. When they turn 15, they are eligible to apply for apprenticeship to varying Crafts, or occupations, that are each very important in their own way to the running of the fief and the kingdom. Young Will, the smallest of the eligible orphans for this year, has always dreamed of joining battleschool and becoming a brave Knight like his father, whom he never knew but pictures as a valiant knight who died gloriously in battle shortly before Will was born, and was instrumental in Morgarath's defeat. Unfortunately for Will, his small size is against him, and Battlemaster Sir Rodney turns him down. However, his agility and ability to hide, sneak and climb catch the attention of the mysterious Ranger Halt. The Rangers of Araluen play a vital role in the running of the kingdom. Each Ranger is assigned to a fief, and he must protect the fief, scout out threats, and remain unseen. The previous defeat of Morgarath was due in large part to a critical tip from a Ranger who went ahead of the army and alerted them to the location of the enemies. Due to the secretive nature of the job, the Rangers are a mysterious bunch.
Over the next few months, Halt begins to teach Will the skills he will need as a Ranger in the coming war with Morgarath, especially developing a keen sense of observation, as well as knife throwing and archery. Will Will be up to the task before him, which is more daunting than he realizes?
***
This book is masterfully written. Author John Flanagan does an amazing job of keeping the reader anxious for more, while crafting a true work of art. He brilliantly weaves danger, intrigue and humor. Will and his fellow wardmates each encounter unexpected challenges, and they learn the power of teamwork as well as developing their talents. Horace, another orphan of Will's age, encounters a trio of ruthless bullies in battleschool, and must deal with the constant torment that they cause him. Will shows great promise in his skill as a Ranger. Horace discovers his natural talent for swordplay. Both boys find they must work together at times to overcome incredible odds. As for humor, I love how Baron Arald loves to crack jokes that only he fully appreciates. The Ranger Gilan, who we meet later in the book, has a clearly mischievous side, though he is a masterful Ranger. Even Halt, who hardly ever smiles, proves to be hilarious at times, although his humor is often more subtle. Another thing I appreciate about this book is Will's honesty. When confronted with a past misdeed, he owns up to it and agrees that it was wrong. At another time, he is involved in a victory, and the stories of his part in the battle are blown way out of proportion among the villagers. This bothers him because he wasn't nearly as heroic as they make him out to be (although he did do a very courageous thing), and he is very concerned that the other people involved don't get much credit. Oh, and did I mention that Halt, Will and Gilan enjoy coffee? :-)
The only negative bit I saw was that some of the names seemed a bit cliché. With a name like Morgarath, how can he help but be the villain? His name reminded me of the land of Mordor in Lord of the Rings (not to mention that in those books, Frodo was stabbed with a morgul blade). It also very closely resembles Mulgarath, the archvillain in The Spiderwick Chronicles (which I haven't read, but I enjoyed the movie). The Wargals, which even have dog-like features, reminded me of the Wargs in Lord of the Rings. Come to think of it, their name is also similar to the Urgals of The Inheritance Cycle, who play a similar role. Also, the Rangers are similar to what Aragorn and his kinfolk do in Lord of the Rings, although Flanagan says that he based that element more on the Texas Rangers (not the baseball team). Interestingly, his publisher made him change the name of the Kingdom of Arathon because it sounded too much like Aragorn. (The series was originally called The Arathon Rangers.) So it became Araluen instead.
Oh, and there is a little bit of mild language.
Overall, The Ruins of Gorlan is an amazing book, and I can't wait to read book 2. I can tell I'm going to enjoy this series.
(I got the picture from the downloads page on the series' website.)
Update: I just watched some videos from the author, and realized that he puts the stress of Morgarath's name on the second syllable, rather than the first. That makes it sound much less cliché.
Posted by StevenSauke at 9:40 PM