Following is the eulogy I read at my grandpa's memorial service on Saturday, May 23, 2015 at United Evangelical Free Church in Seattle. It was broken into three segments with other speakers [indicated in square brackets] in between each segment. 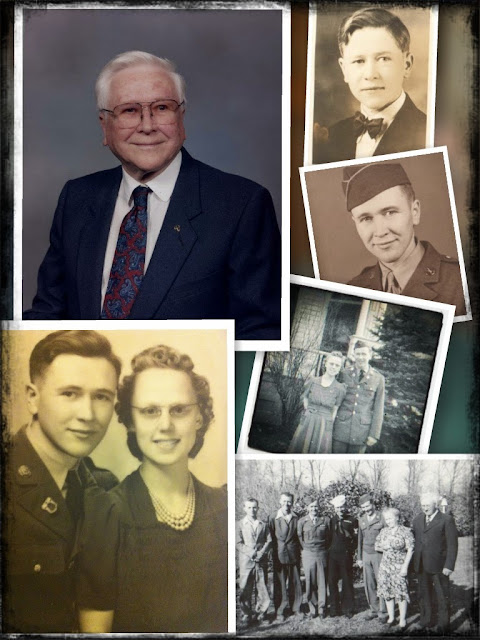 Ken Loge was born in 1915 and raised on a farm in Cooperstown, North Dakota, the oldest of five boys. He gave his life to Christ at the age of 10 at a summer camp, and as he liked to put it, God gave him a very long and interesting life. After graduating from high school, he became a teacher in a one-room schoolhouse and fell in love with a beautiful woman named Marian.

Then came the draft. He found himself on the way to bootcamp in Louisiana, and it wasn't until later, when he was stationed in Boise, Idaho, that his bride Marian was able to take a train out and they were married in a small ceremony by a pastor they had only just met, witnessed by the pastor's wife and some new neighbors. It was Valentine’s Day 1942. Marian returned home, while Ken went on to serve in New Caledonia, an island off the Australian coast. Thanks to his clerical skills, he was pulled to office duty while the rest of his platoon was sent to Guadalcanal, where most of them were killed in combat. Between that and the Battle of the Coral Sea keeping the Japanese away from their base in New Caledonia, God clearly protected him for a very long and interesting life. He was later reassigned to France and Germany, and he would ride through Paris on a tank, surrounded by jubilant crowds celebrating the Allied Forces’ victory.

Following the war, he returned to the US, where he got a job in the circulation department of the Fargo Forum in Fargo, North Dakota. After two years there, he accepted an offer for a position as circulation manager at the Watertown Public Opinion in South Dakota. Later he would accept a new position as the pastor at a church in Brooks, Alberta, followed by another church in Wainwright, Alberta. Big Timber, Montana followed, and then Salmon Arm, British Columbia. While pastoring in BC, Ken was on the founding board of a new endeavor that they called Trinity Junior College. It would eventually become known as Trinity Western University.

Throughout Ken’s careers at the newspaper and as pastor, he and Marian had five children: two daughters, a son, and two more daughters.

After their ministry was completed in BC, the family moved to Stevensville, Montana, where Ken became pastor. It was during this time that their daughter Linda got a teaching job in Hamilton, Montana, and a student in her class required the special ed expertise of a certain Mr. Sauke. But that’s another story. It was also while they were there that, a few years later, his son Robert was killed in a traffic accident, leaving two young children, Tracy and Jeff.

After Stevensville, God called Ken into a new ministry, and he became administrator of the brand new nursing home that would become known as Kah Tai Care Center in Port Townsend, Washington. He and Marian ministered there alongside George and Virginia Foutz, whose son currently attends United. It was also during this time that they would visit their daughter and son-in-law in Hong Kong, and later in the Philippines. One of my earliest memories is walking with my grandpa Loge to the school where my dad taught and my big brother Tim attended.

Ken’s upbringing and various ministries gave him a passion for reaching the lost for Christ. After retiring from the nursing home, he moved to Ancora Village in Everett, where the Loges, along with Lyle and Florence Vanderpoel, were among the first tenants. While there, Ken became a missions consultant with the Evangelical Free Church Mission, coordinating missionary visits to the churches in the Pacific Northwest and Northern Mountain Districts, in addition to other responsibilities. He was a vital part of the ministries of missionaries around the world.

Ken had a vital part in the founding of the Missionary Construction Teams, which has worked on many projects worldwide. During this time, Marian started declining in health, and she lost her battle to cancer in 1989. He was praying with her, and when it came her time to pray, she didn’t say anything. She was too busy singing with the angels. I remember the next morning, when my parents both came in my room to wake me up, half a world away, to tell me my beloved grandma was gone. They had waited until morning to tell me so that I would be able to sleep. That same year, I lost both grandmas, but God would provide two young cousins for Tim, Tracy, Jeff and me, and new granddaughters for my grandpa. Annika and Darcy could not have come at a more perfect time.

Following the loss of Marian, Ken once again visited the Philippines, Hong Kong and Japan. He would come back and report to the churches in the US on the ministries in Asia.

In 1991, we returned to the US, and in 1993, Andrèa joined us to complete the group of grandchildren. Along with my parents and Tim and me, Grandpa went to Hong Kong in the summer of 1994 to teach English, and he would continue to go back for a few summers after that. I was particularly amused that, as he made a practice of walking regularly, those of us who were younger had trouble keeping up with Grandpa as he speed walked down the streets of Hong Kong. While there, he impacted many youth for Christ, and his legacy lives on around the world.

In the following years, he would revisit Europe, where he saw it completely rebuilt from the rubble he had previously seen at the end of the War. He also visited Turkey, Thailand and China, in addition to traveling to Norway to meet relatives in his mother country.

In 2012, his son-in-law Tom accompanied him to Washington, DC, where Ken was honored in the Lone Eagle Honor Flight for his service in the War. This organization brings veterans to see the memorial there in memory of their service around the world. The Mariners would later honor the veterans from the Honor Flight at Safeco Field.

In 2013, he was honored at Trinity Western University for his role in its founding by having a dormitory named after him.

By this time, he was slowing down, but his passion for reaching people for Christ continued unabated. Last May he came to Activate, United’s youth group, and shared about how at the age of 10, he went forward at a summer camp and gave his life to Christ. Just last month, he wrote a letter to each member of Activate urging them to come to Christ if they haven’t already. A week before his death, he prayed passionately for anyone who does not have Christ.

May 9, our family sat vigil in his room. His pain was evident, and he was ready to go. He could hardly talk. We said our good byes, and I asked him to give Grandma a big hug from me. When Annika told him she loved him, he said, “I love you.” Those were the last words I understood from him. In the afternoon his niece Nola arrived. He opened his eyes and acknowledged her. Then he was gone. He was four months short of his 100th birthday.

In previous years, we cousins knew that if Grandpa was leaving the family get-together, we had to hurry to say our good byes. Someone would yell, “Grandpa’s leaving!” and his grandchildren came running. This time, nobody needed to yell. But Grandpa left. I can’t wait to see him again.

In addition to his wife Marian and his son Robert, he is also preceded in death by his parents Swen and Lisa, and four younger brothers, Maynard, Melvin, Truman and Spencer. Ken Loge is survived by four daughters, Linda, Bonnie, Lois and Dori, as well as seven grandchildren – Tim, Tracy, Jeff, Steven, Annika, Darcy and Andrèa – and five great-grandchildren: Austin, Taylor, Autumn, Ava and Katlyn.

My grandpa passed away on Saturday, May 9. I wrote the following a week later on May 16.

Grief is a funny thing. I sat with my family at my grandpa's bedside last Saturday and watched him struggle to breathe, struggle to talk. All I could understand was when he told my cousin Annika, "I love you." We all said good bye, and I had trouble getting out my request that he give my grandma a big hug. My mom's cousin arrived, and he acknowledged her presence, and then was gone. I knew it was coming, and I hoped it was a false alarm. But no pulse. I was OK for a few minutes, but then the tears came back. We made calls to family and to church.

Tuesday, I returned to work. One of my coworkers is Colombian, and I like practicing my Spanish with her. I thought maybe I wouldn't have too much trouble if I told her in Spanish. I was wrong. Tears.

I expected to be emotional at the viewing and graveside service yesterday (Friday). It was deeply moving. I stood in front of my hero's casket and looked at him. I liked how he had a bit of a smirk (which he did not have when he died... I'm not sure if that happened naturally when they closed his mouth, or what), and I rejoiced that he was finally free of his pain. He's in glory with my grandma in the presence of Jesus. Our family friend Mark Halstrom spoke eloquently at the grave site next to the flag-draped coffin. A soldier played Taps on the bugle, and then the soldiers folded the flag and presented it to my mom. It was an amazing, moving ceremony. But I was not expecting the lack of tears at the graveside. I've felt a mixture of pain, relief and joy that he is no longer suffering.

Then this morning, as I was pulling out of the driveway, I drove over a snail. I had tried to save its life by kicking it out of the way before leaving, but it wouldn't budge. I tried to avoid it, but the tire rolled over it and smushed it. That was more traumatic than it would have otherwise been.

Then, this evening, after not crying (much) for a few days, I noticed my grandpa's World War II Veteran hat sitting on the couch. And lost it. The flag pin on it is askew. I was always fixing that when he wore it. I was slightly baffled how I could stand in front of his body and not cry, but then lose it when I noticed his hat.

Grandpa, I miss you! See you soon! 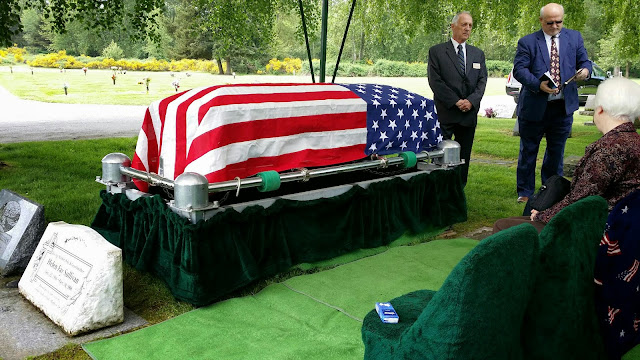 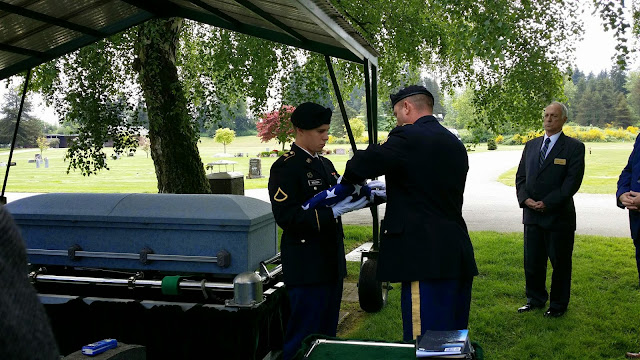 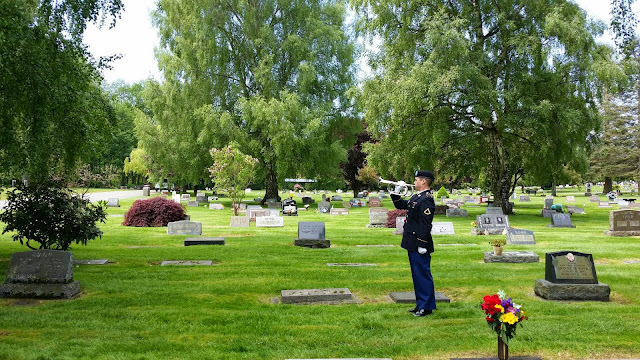 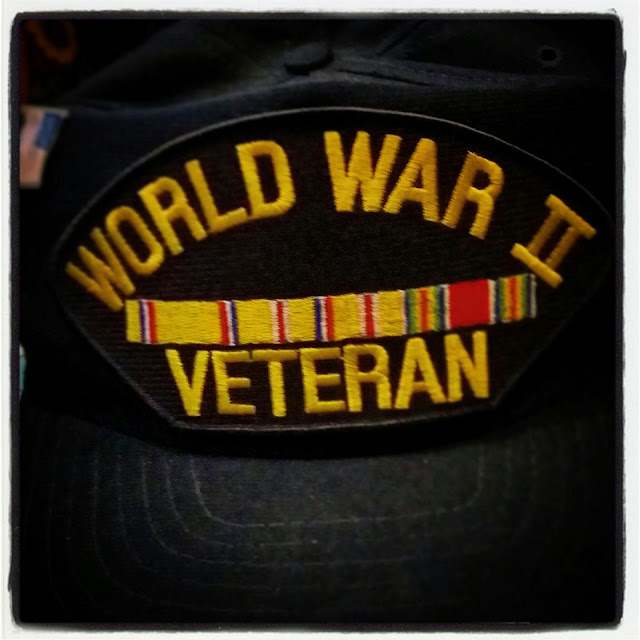