Dark of night. The basket lowered slowly down the wall as its occupant silently crouched, not making a sound. He was a marked man.

Saul was in a tough situation. He had been on his way to Damascus on a mission to arrest the followers of the recently-crucified Jesus, and following the subsequent public execution of Stephen. As a devoted Pharisee, he was notorious for his ongoing efforts to persecute and martyr the followers of Christ. He was determined to arrest them and bring them to Jerusalem for prosecution and execution. But all that changed on the road in a blinding flash of light when Jesus spoke to him and turned his life around. Instead of arresting followers of The Way (as it was called at the time), he was led into Damascus, blind, having been told to await further instructions at the house of Judas on Straight Street.

The basket creaked as it lowered further. He recalled more about this strange adventure.

Three days had passed since his arrival in Damascus. He had been blind and had not eaten anything, opting instead to fast and pray. He heard a man approaching and felt hands on his shoulders. "Brother Saul," said a voice, "the Lord - Jesus, who you saw on the road to Damascus - has sent me to you so that you can see and be filled with the Holy Spirit." Something like scales fell off his eyes and he looked into the face of Ananias, a follower of Christ who had been sent to him for this purpose. He got up and was baptized, and then he got some food.

As the days passed, the Jews and the followers of The Way were thunderstruck to find a man they knew had come to arrest them, instead boldly proclaiming in the city streets and proving that Jesus was the promised Messiah. This was the polar opposite of the mission he had so recently been pursuing and enforcing. As news got out, the Jews in Damascus smelled a turncoat and started watching the city gate day and night to make sure he couldn't leave before they could arrest and kill him. But Saul got wind of the plot, and he and his new friends came up with a plan. There was a hole in the city wall. They took a large basket and he got in it. They let it out through the hole and slowly lowered him in it with ropes.

The basket reached the ground. Stealthily, he moved away from the wall, avoiding the city gates, and returned to Jerusalem.

Saul's life was saved due to precautions that he had to take. He would encounter similar shock from the followers of The Way in Jerusalem, but Barnabas would stick up for him. He would debate with the Hellenistic Jews, who also tried to kill him. The followers of The Way in Jerusalem took him to Antioch, and from there sent him on to his hometown of Tarsus. Barnabas would later go to Tarsus to find Saul. They would then spend a year ministering in Antioch, and Saul, also known as Paul, would go on to travel around the Mediterranean area spreading the Gospel.

Paul's life was saved because he took precautions. God protected him, but he also had to take action. Without those precautions, we would not have a large portion of the New Testament, and the beginnings of the Christian Church would have been very different.

We need to have faith. Faith allows us to boldly proclaim the Good News. Faith in God's love and protection has been a major factor down through the years in propelling the growth of the Church. But precautions are also necessary.

How many lives would be saved today for lifesaving work in the future if we would just take precautions during this pandemic? Compared to the precautions Paul had to take, we are being asked so little. Just a mask and a poke. If Paul had boldly left Damascus through the gate, he would have become a martyr before the bulk of his ministry even began. Similarly, we must eschew the idea that wearing masks and getting the vaccine shows a lack of faith. We have a mission to save lives, and we must not just assume God will miraculously protect us from our own folly. He can easily do so, but that is not how He operates every time. 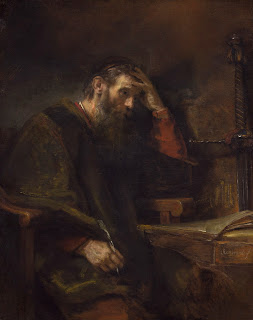