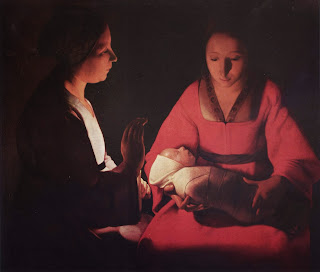 Hey, everyone! Jeanette! Isabella! Come on and visit this new baby in Bethlehem! Spread the news! Since it's dark out, you'll need to bring torches, and remember that Jesus is sleeping. So you need to be quiet so He can sleep. Don't wake Him, but just look at those rosy cheeks! Isn't He the cutest baby you ever did see? Everyone, come look! But shush! He's sleeping!

That's the gist of the 16th century Provençal carol (from Provence, France) Un flambeau, Jeanette, Isabelle. According to Hymns and Carols of Christmas, the song may have been written to evoke the building of a crèche, or glorified nativity scene. (French tradition goes beyond a scene of the stable to include the whole town surrounding the stable.) It is possible that French painter Georges de la Tour was inspired by the song to paint, likely his Le nouveau-né (above). If that is the painting in question, it likely depicts Jeanette and Isabella holding and quietly blessing the baby Jesus. The torch appears to be just out of the picture, as it is clearly dark, but there's light nearby.

It could also evoke the mixture of the Hanukkah and Christmas traditions of processionals with candles and torches, which were common in Provence and Southern Europe.

Who were Jeanette and Isabella? According to the blog Window Toward the World, they were milkmaids who went to the stable to milk cows, but instead found a baby in the manger. When they made this unexpected discovery, they hurried to the town and invited everyone to come see, but were adamant that everyone keep quiet so the baby could sleep. (That blog cites Wikipedia for this, but the Wikipedia article seems to have deleted that story since the blog was published.) In any case, both in that blog and the Wikipedia article, it tells that Provençal children still dress as milkmaids and shepherds and go to Midnight Mass at Christmas while singing this song and carrying torches.

The tune may be from a 14th-century dance for French nobility. The lyrics were first published either in Cantiques de Premiere Avenement de Jesus-Christ ("Songs of the First Coming of Jesus Christ") in 1553 or Noëls français ("French Christmases") in 1901, depending on who you ask. I think the 1553 date is much more likely, as, according to Making Music Fun and Wikipedia, it was translated into English in the 18th century. It's highly unlikely a song that was written in the 20th Century was subsequently translated in the 18th, and a painter was inspired by it to paint in the 17th. Unless it has some connection to PDQ Bach (1807-1742). I have seen no indication of such a connection anywhere. Or maybe The Doctor was involved? That could get a bit "wibbly wobbly timey wimey"... Hmm...