Today has been a very long day, as it was day 1 of the 2017 Escape Adulthood Summit. This is an annual conference hosted and put on by my friends Kim and Jason Kotecki. Jason is an artist and motivational speaker, and he and his wife Kim have a passion for helping others to become more childlike, realize their potential in life, and follow their dreams and passions. There are so many unwritten (and nonexistent) rules that adults often tend to follow, and they tend to hold us back if taken too far. We let fear, hurt and other things stand in the way of following our dreams. What if people don't like what I have to say? What if? What if? Children don't have many of these inhibitions, and we can learn a lot from them on how to live life.

The day started yesterday evening when I caught the airport shuttle, and then a red eye flight out of Seattle bound for Minneapolis. The Minneapolis airport is quite large, so I got quite the workout walking to my connecting flight to Madison, Wisconsin. Upon arrival in Madison, I was picked up by Dan, a new friend who, like me, showed interest in sharing a hotel room. Since I arrived several hours before the summit was set to start, we drove around Madison. I got to see the Wisconsin Capitol building, which is spectacular, and we stopped at the lake, where I got some pictures. We walked out on a dock, and I commented that the dock rocked! Literally! 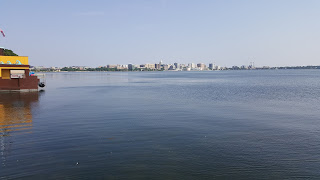 We then proceeded to the nearby town of Poynette, where the conference is being held. Still early, we drove around the area and saw some buffalos grazing, and we passed a pleasant farm. We then went to the conference location, but they weren't ready to let us in yet, so Kim sent us on an errand to get some whimsical flowers and come back closer to the starting time. We found a nearby country store that advertised selling asparagus and flowers. 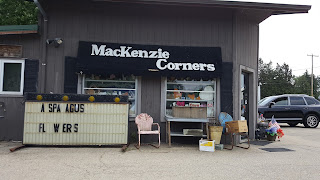 Once we explained what we needed, the helpful lady who owned the shop proceeded to arrange a bouquet. Once we had paid for it, they invited us to sit down and chat. Country life is slower and friendlier than I'm used to in Seattle. The lady who helped us was at the table with a couple elderly women, and they asked what we did, and told us a bit about themselves. One of the older women told us about how her husband was a pilot and flew a two-seater aircraft. They flew that plane up and down the coast, around the US, and then proceeded to fly around the world, mainly stopping to refuel and rest. She mentioned stopping in Adelaide, Australia, where they have opal mines. She was wearing an opal ring that they got there. They had a landing strip on their farm in Wisconsin, and after her husband passed away, she donated the plane to Wings of Hope. She feels her husband would have approved. I'm probably not doing the story justice, but it was fascinating, and I appreciated her sharing her story. We were probably at the store for an hour or two, chatting most of the time. By the time we left, it was closer to the starting time.

When we got back to the farm where the conference is held, we had fun playing with bubbles while we waited for the doors to open.

The conference started out with lunch. They had enlisted the services of two food trucks, and there was also lemonade and other drinks. I selected the food truck with tater tots covered in a variety of different toppings. Mine were poutine tots. They were delicious, though Mia, a Canadian fellow attendee, took one look at them and informed me they were not authentic (I asked).

As we entered, there were personalized goody bags on the table by the door, which included everyone's nametag (which is how the bags were labeled) and a bunch of supplies for the summit. There were little Lego people, t-shirts, a small notebook, some of those pens we had when we were little that have something like 15 colors in one pen, and more.

As the talks began, I made a point of writing every line of my notes in a different color. I felt at first this was a fun childlike way of writing notes. As the summit went on, I realized the choice of colors was getting harder, and rather than childlike, it was becoming symptomatic of adultitis, as I started missing things due to the choice of color taking place in my head. Lesson: Trying too hard to be childlike can be a symptom of adultitis.

The theme for this summit was: "EVERY DAY IS AN ADVENTURE"

Jason quoted Helen Keller: "Life is either a grand adventure or nothing." He pointed out that we often don't do something because we're afraid it won't work. Instead, we should ask ourselves, "What if it does work?"

The best adventures follow no maps.
"I have no special talents. I am only passionately curious." - Albert Einstein
What is one thing I can do to make this a little better?
Live like someone left the tank open. (This was inspired by an octopus who escaped its tank.)
"And the day came when the risk to remain tight in the bud became more painful than the risk it took to bloom." - Anaïs Nin
"This is not rocket surgery here."

They suggested shouting things like "You rock!" out your window at passersby. We need to hoard memories rather than things. We need to be more ridiculous.

Jason recommended tinker projects, which he has started doing. (He explains that in the link better than I could.)

Instead of saying "Here goes nothing" when trying something out, we should say, "Here goes something!"

For one of our activities, we made ugly cakes. We were given pre-made cakes with frosting and all kinds of random items to put on them. Each table formed a team, and we were to be as creative as possible. Our team's cake was "New York Zombie Apocalypse" (or something to that effect). We ripped the cake into several pieces and built structures on it. There were zombies involved. There was even a zombie penguin. It was pretty impressive, if I do say so myself!

Before dinner, we broke into teams and did improv games with an improv troupe from Wisconsin called Mojo Dojo. They were impressed with our improv chops, and we had a great deal of fun. After dinner, they did a show.

The weather was stormy off and on. At times it was sunny, and at other times, the clouds rolled in, the rain dumped, and they had some seriously epic lightning strikes. I was wishing I was fast enough with a camera to get pictures!

To be continued...
Posted by StevenSauke at 9:07 PM No comments:

Thoughts on recent events related to a misguided picture posted this week that went viral...I suggest reading the whole thing before you respond.

All sides have good points.

No matter how much you hate a person, pretending to behead them the way Kathy Griffin did is a horrible, shameful deed, even if you have no intention to actually physically harm them.

A normal citizen who did that would be in prison, but it seems that rich, popular comedians only get their shows cancelled (rightly so).

Barron Trump is 11. Under no circumstances is it OK that he was led to believe, however briefly, that his father was brutally murdered. Nor is it OK for us to criticize Trump for defending his son.

It is just as horrible that Sasha and Malia Obama had to deal with seeing people hang their father in effigy, burn images of him, and otherwise commit the exact crime against Obama that Griffin committed against Trump. Since the Obama effigies didn't go as viral, I don't know if they were fooled as Barron was.

I think it would help if Barron and Melania move to the White House as soon as possible so Barron will not be so easily fooled, having his father right there.

Kathy Griffin apologized. Many of the people calling for us to forgive her are the same people who call for the heads of people who do similar things to liberals, long after they apologize.

Kathy Griffin only apologized after being pressured to do so. However, I do believe we need to move on, and we do need to allow her some reprieve. It's more than she deserves, but every one of us has made horrible mistakes that we regret. Yes, she needs our forgiveness.

The Trump family has been deeply traumatized by this. Yet they have been called bullies for responding as any family would when threatened by a realistic-looking effigy. Griffin's act was one of the worst examples of bullying I have ever seen in my life. Calling the Trumps bullies for this is victim shaming at its finest. They have done enough actual bullying without criticizing them for their reaction that was probably much calmer than most families faced with this kind of brutal attack.

I have seen reports that Griffin has received death threats. This is even worse than what she did. I find the increase of death threats on social media in recent years to be a deeply disturbing trend that needs to be prosecuted to the fullest extent of the law. It is never OK to threaten to kill someone, to tell them to commit suicide, or in any other way wish death on them. Even as a joke.

Both Trump and Griffin are human. Both have done horrible, grievous things. Both are bullies. We need to hold them to high standards, but we also need to extend grace to both. Those of us who pray need to do so earnestly for both of them.

We must move on and let both sides heal. I was traumatized seeing that picture, and I don't even like Trump. I hope this is a wake up call to everyone that we need to be civil to each other.
Posted by StevenSauke at 4:46 PM No comments: