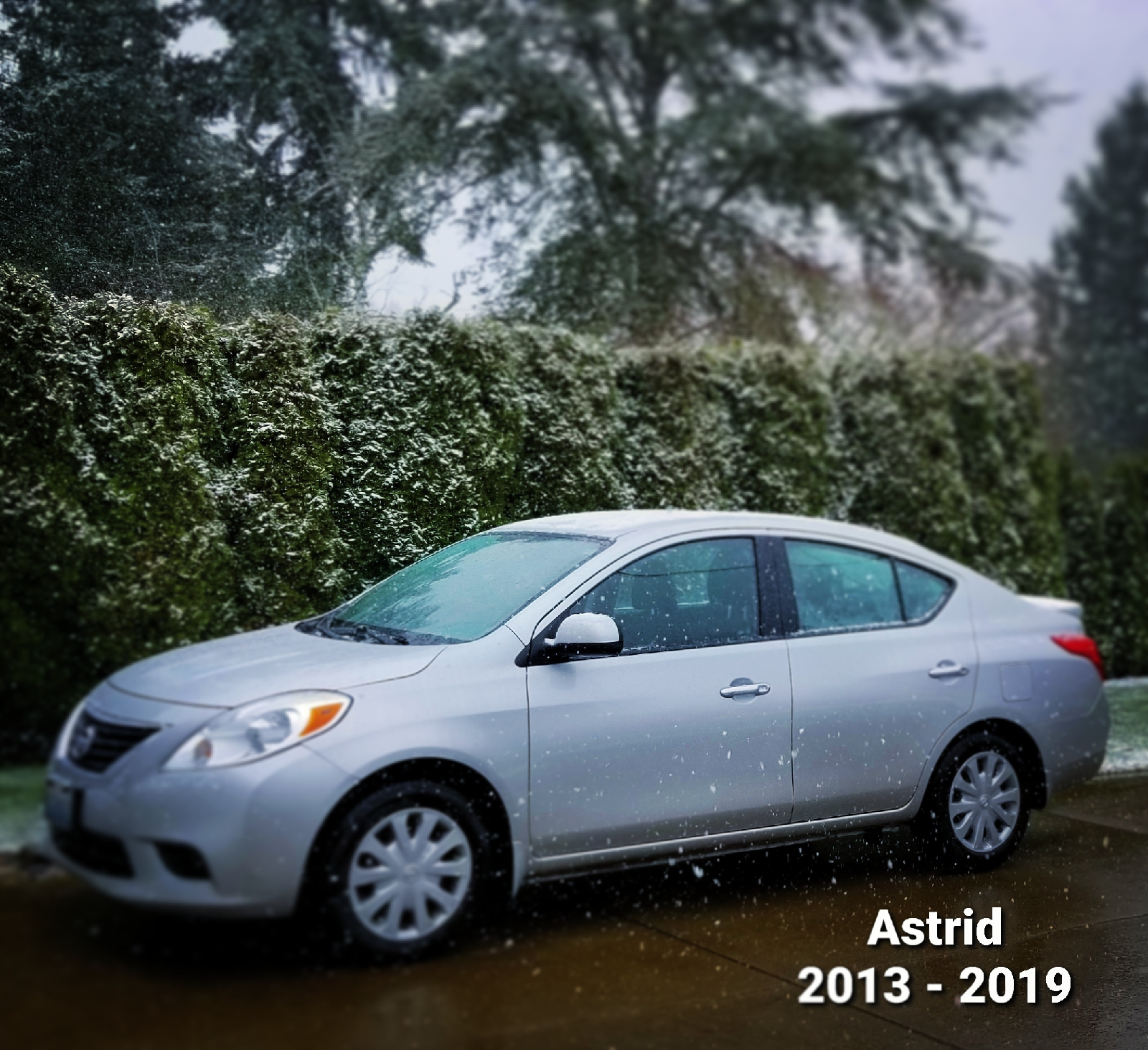 Astrid, my beautiful Astrid
From the first test drive, I was in love!
Your shining silver coat
Your wonderful gas mileage
You were always there
I could always depend on you
To get me where I was going
My pride and joy
My own beloved car
I couldn't ask for a greater automotive child
You were my own
I loved you so
We went through so much together
My sweet, strong car
On that final ill-fated trip
You got us far
You worked so well
And when disaster struck
Divine strength guided us
Between the trees
Glancing off, not hitting head on
Coming to rest
Airbags deployed
Injured, but alive.
Beloved Astrid,
You saved our lives
But lost your own
I thank God
For His Divine Strength
His Astrid that He gave me
Five years I will never forget
Five years with my first car
Dependable to a fault
Now, my beautiful car,
Your time is done.
Rest in peace.
Posted by StevenSauke at 3:44 PM 1 comment:

I don't like clickbait any more than I did when I wrote the previous blog about musical clickbait. But I still like to make fun of it. Here are some more headlines for you. (Note that not every headline is 100% accurate. That is intentional.)

They land in a small town in Canada. But they weren't expecting THAT MANY planes at the airport or THAT welcome! We're CRYING!

His therapist told him to write himself a letter. You WON'T BELIEVE what happens when people read it! Share. Like. Spread this EVERYWHERE!

I've been wrong all this time! THIS is why the Lord created men!

You won't believe how this con man seduces this librarian!

She decides to marry her boss. What happens next will make you sing!

Her ambitions as a writer are ASTONISHING!

They put out the call for help. When Brooklyn responds? I'm SHOCKED!

Displaced by a TORNADO, she uses THIS WEIRD TRICK to get home!

They just ease on down the road to reach their goal!

Jealous uncle USURPS the throne! What happens next? Hakuna matata!


Posted by StevenSauke at 10:08 PM No comments: 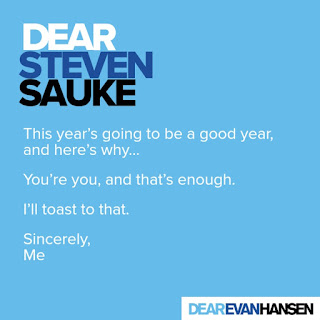 Today is going to be a good day, and here's why.

I went to see Dear Evan Hansen this past Friday on its national tour. It really got me thinking about how I treat the people around me. While I endeavor not to resort to bully tactics like Connor, my integrity is far too important to me to lie like Evan or betray confidences like Alana, and I hope I don't put conditions on helping others (or encourage dishonest behavior, or neglect to keep my mind out of the gutter) like Jared, I can see myself in several of the characters.

I remember my first day in 8th grade, at a new school in a new country, standing in a hall full of strangers hugging each other and greeting each other excitedly after a summer of missing each other. It was like I was "waving through a window," too scared and shy to talk to others. But I made friends that year. Some of them are still friends today. People teased me about my old-fashioned clothes (stripes were out of fashion, but I was not to know that, having recently returned from the Philippines). Classmates teased me about not knowing common American phrases like "The King is dead." (I only found out at the end of the year they were referring to Elvis and not Jesus.) A classmate wrote on my jacket in pencil, and when I tried to erase it, it wouldn't erase. I had to get a new jacket. As I progressed through high school, my classmates and I matured, but we were still typical teenagers. (Well, I've never been especially typical, but you know what I mean.)

I think about the way Connor and Evan treated their families.

Connor's parents and Evan's mother were trying their hardest to raise their children, and kept coming across roadblocks and complications. Connor treated his family so poorly that his sister Zoe couldn't remember one good thing about him, and though his mother Cynthia insisted there were good things, she couldn't name one. Larry Murphy tried to provide for his son and teach him, but he didn't listen or seem to care. Please, let me never inspire my own dad to lament, "I gave you the world, and you threw it away!"

Heidi Hansen did everything she could to provide for her son, while dealing with her own pain of the divorce ten years earlier, and her ex-husband moving on and starting his own family. She worked at the local hospital and took law classes, and even though she wasn't as available for her son as either of them would have preferred, she still made time for him. But he didn't truly appreciate it. He even lashed out at her when she made time for him, and he kept important things from her in an effort to cover up his lies. She learned major things about her own son on social media. Stuff he never told her.

Larry, Cynthia and Heidi all made sacrifices for their children, and they still felt like failures at times. That's part of being human. I don't consciously lie to people, but how many times have I withheld details that would have been important to someone who loves me and wants to help?

I guard my integrity jealously. It is one of my most deeply-held values. But, as with anyone else, it can always use improvement. Too often I take my family's love and sacrifices for granted, and I don't show the appreciation they deserve. At my current job in customer care, we have to deal with the fallout of salespeople's overpromises at times. How many times have I made a promise in other areas of life, and either come up short or forgotten to follow through? How can I learn from those experiences?

My family and friends are precious to me. I love them dearly. But sometimes I come up short and need "a little reinvention" (but in a more honest manner than the context of that quote in the musical). How can I reinvent myself rather than the facts? I'm thankful I have God and respected relatives and friends to help me with that!

The Connor Project was an amazing, important idea. We need more projects like that to remember people who were forgotten, to reach out to people who feel invisible and unloved. We need to remind them that they will be found. They are loved deeply. They are valuable. But we can't found these initiatives on lies. Good may come of it, but the guilt and torture lies can unleash is harmful.

As for the performance, set, and technical details, I thought it was amazing. The things they did with lighting, the way they showed texts, essays, Facebook posts, YouTube videos, e-mails, and more, was incredible. With all the social media going on onstage, I didn't even realize until the end of the show that there were only eight people in the cast! Noah Kieserman was fantastic as Evan, and I would have never guessed he was an understudy. Particularly since it was his face in the videos onscreen replaying his speech. (It was clearly not filmed live, as there's a curtain behind him in the videos, but not when he's giving the speech.) They must have videoed all the actors and understudies doing that scene in front of a school auditorium curtain. Everyone - cast, crew and orchestra - nailed their parts. The orchestra was on a balcony above the stage, and there were seats for audience in the orchestra pit. As is evident from my thoughts above, I came away thinking about how I can be a better, more appreciative person. So much in the show is relatable.

I have the most amazing parents and brother I could possibly imagine. I have several close friends that I consider siblings. I also have a lot of amazing friends that I don't consider siblings, but still love and respect deeply. How can I express more how much I truly love and appreciate them? I have been so blessed with such an amazing family, incredible friends, awesome coworkers (who are also friends), and so much more. May I never neglect to remind them how loved, respected and valued they are.

"Even when the dark comes crashing through
When you need a friend to carry you
And when you're broken on the ground
You will be found." 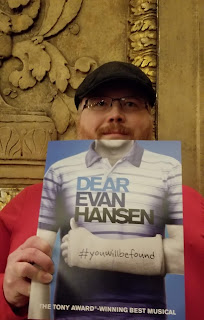 Graphic at the top generated from https://dearevanhansen.com/newyears/

Posted by StevenSauke at 1:19 AM No comments: