Her story is inspirational. She aspired to be an airline captain from a young age, at a time when that was an occupation reserved for men. She pursued her dream, rising from pilot to flight engineer, and eventually became American Airlines' first female captain in 1986. On September 11, 2001, she was flying from Paris to Dallas when she heard on the air-to-air frequency that the Twin Towers had been hit, and New York airspace was closed, followed shortly thereafter with airspace across the country. She was ordered to land in Gander, Newfoundland, where she experienced hospitality that amazed her. Her story is told in the musical Come from Away, and I interviewed her over the internet in 2018 for a blog post for All Things Broadway. In later blog posts (here and here), I told about when the national tour opened in Seattle and I got to meet several people whose stories were included in the musical. Kevin Tuerff invited me to attend an exclusive viewing of the documentary You Are Here: A Come From Away Story, where I met him, Nick and Diane Marson, Beulah Cooper, Bonnie Harris, Kevin Jung, Oz Fudge and others. Though she couldn't make it to the viewing, I met Diane Davis a couple weeks later after attending the musical for the third time. What I did not mention in those blog posts, because it hadn't happened yet, was meeting Beverley Bass. She also couldn't make it to the viewing for the documentary because she had needed to leave earlier in the day.

In 2019, Captain Beverley Bass released her children's book Me and the Sky. I promptly ordered it on Amazon. I also found out she was coming to Seattle! Since I had interviewed her previously and greatly admired her, I sent her a message to see if I could meet her. We arranged an appointment to meet at her hotel near Boeing Field in South Seattle. As I had ordered her book online, I was a little worried it wouldn't arrive on time, but it arrived the day of the appointment, before I left! I had also recently obtained the companion book to the musical, Come from Away: Welcome to the Rock: An Inside Look at the Hit Musical, which had also just come out. With both books, I made the trek south to meet one of my heroes! 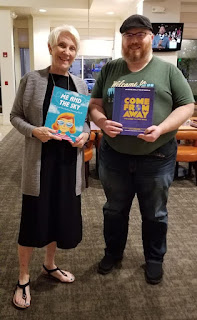 We met in the lobby and she gave me a big hug. We went to the hotel café, where she bought me coffee (she rocks!), and we talked. I don't recall a lot about the conversation (I didn't take notes, as it wasn't an interview :-) ), but the meeting was very memorable. She hadn't seen the companion book yet, so she excitedly leafed through my copy. Neither of us had a Sharpie handy, so she borrowed one from the hotel and signed both books. (Unfortunately, I'm not sure why, but the ink faded quickly. Does anyone know if it's possible to restore faded Sharpie ink?)

It was a day I will never forget, when I met a legend who made history. I felt honored that she took time to hug, to talk with me, and even buy me coffee!

Posted by StevenSauke at 1:43 PM

Email ThisBlogThis!Share to TwitterShare to FacebookShare to Pinterest
Labels: American Airlines, autograph, Beverley Bass, Captain, coffee, Come from Away, generosity, inspirational, kindness, legend, Me and the Sky, pilot, You Are Here