"If you strike me down, I shall become more powerful than you can possibly imagine."

He watched his protégé and best friend, whom he loved like a brother, slowly turn bad. He fought his friend through lava flows that would burn away said friend's limbs and severely maim him in other ways, causing him to need a mask to breathe. I ask you, is this the action of a friend?

Then, Anakin out of the way for the moment, he contrived to separate Anakin's children and not tell his "dear friend" the joyful news that he was a father. He would spend the next few years as a hermit on a desolate island, only starting to be helpful when Anakin's daughter asked for help, and Anakin's son came to him with a droid with a message. Then he handed the whiny brat of a Luke a deadly weapon before telling him what it was. What if Luke had pressed the wrong button with the lightsaber pointed at himself? When that scheme didn't work, he made up some harebrained story about Darth Vader killing Luke's father - which he would later explain away by claiming it was true "from a certain point of view." Whatever.

Then, next time he saw old Anakin, he declared pompously, "If you strike me down, I shall become more powerful than you can possibly imagine." So, always willing to help a friend, Anakin took Obi-Wan's advice.

Like Yoda, Obi-Wan just disappeared. Like Yoda, I didn't see a body. Did he die? Like Yoda, he would show up later as a force ghost. He spoke in a creepy voice to Luke telling him to use the force. But were his actions as a ghost particularly powerful? Unless you consider spooky apparitions and voices powerful, not especially.

The last we see him as Obi-Wan, he is a holographic ghost smiling at the pawn he trained to defeat his old friend.

Fast forward about 30 years. A new generation has arisen, and now we see a powerful holographic ghost who is commanding his friend's grandson to commit horrible atrocities. 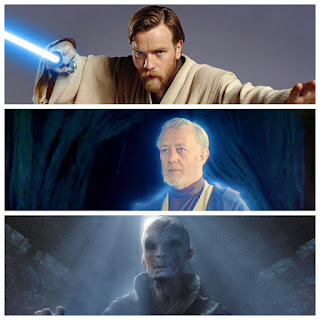 I rest my case.

Posted by StevenSauke at 9:09 PM No comments:

He has lived his very long life as a small being. He grew up green, with big ears. Though he didn't make a big deal of it that we know of, there is a hint that he was self conscious of his tiny stature:

It sounds to me like he was trying to convince himself.

The last time we see Yoda, he is lying in bed, dying. But is he dying? He just disappears. I didn't see a body. Oh sure, he shows up later as a force ghost. That just proves that he isn't completely gone. He has become another kind of being. Transparent, but visible to Luke.

Fast forward about 30 years. A new leader has risen. He is holographic and huge. (Remember, Yoda was holographic and tiny last we saw him.) He is transparent at times, and visible to Luke's nephew. Snoke is just as bald as Yoda, but he does not look as good. Clearly, he has aged in that time. His study of the Force has clearly taught him to overcome his tiny size and long poiny ears. He is now HUGE! Even seated, he towers over his underlings. Perhaps it's the memory of Darth Vader that turned him bad and made him talk forward. Or maybe it's the influence of General Hux (who looks suspiciously like Bill Weasley ... coincidence? I think not.) and/or Kylo Ren. Snoke seems to be just as respected by the First Order as Yoda was by the Jedi. 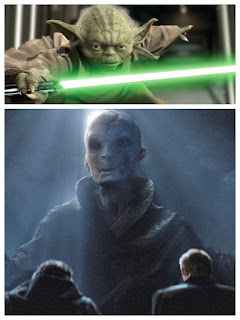 Supreme Leader Snoke has been the subject of numerous wild theories regarding his identity. Some believe he is Darth Plagueis, the infamous Sith legend. (This has been denied by the powers that be.) Some say he is the youngling who talked to Anakin Skywalker before Anakin slaughtered everyone in the room. Some even say he is Darth Vader or Jar Jar Binks.

These, of course, are ridiculous.

I was watching Star Wars: The Force Awakens the other day and came up with some brilliant theories of my own. I feel confident that one of my theories is accurate. Time will tell which one it is. The next few blog posts will detail who I think Snoke is.

Posted by StevenSauke at 8:38 PM No comments: